Home Blog Micro Roni vs Mck Which Is Better? 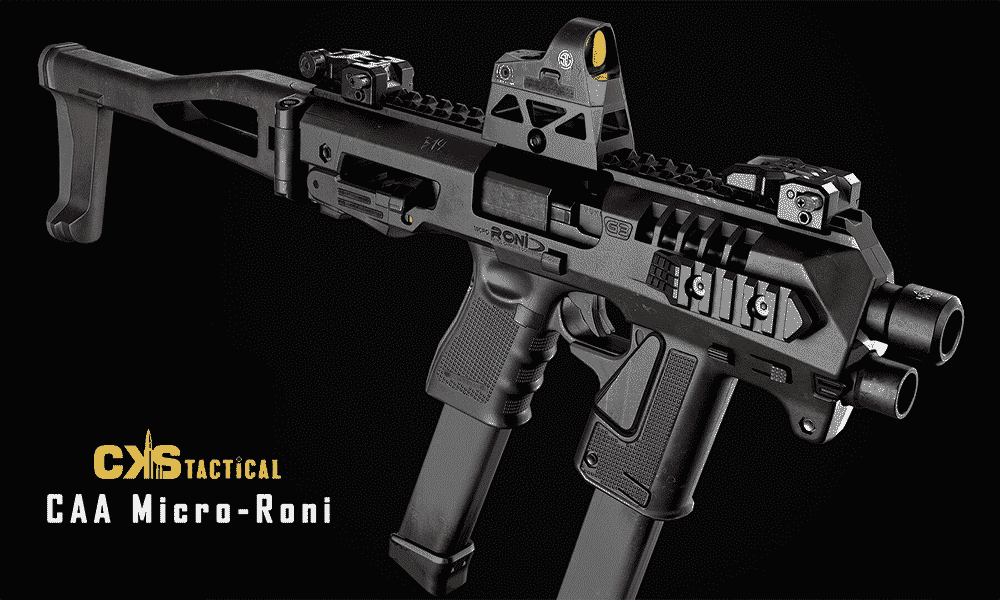 The Micro Roni and MCK are conversion kits that can convert a pistol into a PCC (pistol caliber carbines). Buying a pistol conversion kit comes with so many advantages. One of which is its ballistic advantages: it gives pistols similar to that of a rifle but with a bit of limitation.

Micro Roni vs Mck Which Is Better?

You can still use the same magazine size as your pistol with the Micro Roni kit, unlike other conversion kits. The Micro Roni also features an integrated forward grip. As a big polymer shell, the Micro Roni kit comes with either a folding arm brace or a folding stock that allows you to shoulder your pistol like a rifle. On top of the stock is a rail on which you could mount an optic or iron sights.

The T-shaped charging handle has ridges, so the serration locks the pistol in place when slipped inside. And irrespective of the rear sight you have on your pistol, the big cutout on top, the charging handle will still fit over it. Overall, shooting a pistol equipped on a Micro Roni is enjoyable as there is nil recoil, plus the gun remains lightweight. Many users had the only complaint with the Micro Roni kit: lock the slide to the rear while focusing on a target.

MCK (Micro Conversion Kit) is also Command Arms Accessories (CAA) product. The CAA MCK is a well-thought-out design, which allows the addition of all manner of CAA MCK accessories like flashlight, iron sight, sling, and so on. MCK designed this kit to be readily available for several types of guns like the MCK Glock models, SIG MCK series, S&W series, etc.

The CAA MCK gen 2 and other models are primarily made of strong, lightweight polymer and do not rust. The MCK comes with an extended stabilizer that makes one-handed firing possible which is great for better shooting performance. The extended stabilizer makes it easier for users to fire their guns, whether folded or locked.

On the MCK are aluminum top and side Picatinny railings that allow a combination of MCK accessories. At the front of the kit is a spare magazine holder is held in place by friction for easy and faster reload. The built-in charging handles also come in handy, making assembling and disassembling quick and easier.

Micro Roni vs MCK: What is the difference?

With everything we have said so far about these two, you should know what to expect from them. But when it comes to comparing the Micro Roni with MCK, a couple of features distinguish them. So, irrespective of the conversion kit, you may end up getting take into consideration the following factors:

On the other hand, the MCK offers better ergonomics on both the trigger and the forend. On the MCK, the front spare magazine holder can also double as a foregrip. Hence, you get better stability on the MCK, especially when holding it with both hands.

Accuracy-wise, the Micro Roni and MCK come with features that help make the pistol more accurate and easier to control. On top of both conversion kits is a rigid platform that makes it easy to attach optics or throw in a red dot laser, and so on. Also, below the barrel, there’s a plastic insert, although the MCK conversion kit has a much deeper groove than the Micro Roni, where you can attach the flashlight.

But a weakness both conversion kits share is that when you remove and reinsert your gun, you may need to zero the optics again as it may shift slightly. Nevertheless, the MCK is more accurate than a Micro Roni because it offers better gripping ergonomics.

In terms of versatility, both Micro Roni and MCK come with conversion kits that accept all manner of options for accessories. They both can accommodate different models of guns; however, there are some limitations.

While the Micro Roni and the MCK advanced kit accept similar pistols, the MCK is compatible with more guns. Ballistically, neither the Micro Roni nor the MCK requires you to change the type of mags your guns use.  If you don’t have a conversion kit installed, you can still fire the same pistol rounds as you usually will.

Another important feature to consider when comparing these two conversion kits is their reliability. Reliability is like the experience you have with the kit. While both are reliable, you have reliability issues when the gun doesn’t fit properly.

The only reliability issue you may face with the Micro Roni is that it sometimes gets stuck in the shell between the slide and frame. Whereas on the MCK, you wouldn’t encounter such malfunction. The MCK is also more reliable as it has a cut-out that makes it easy to operate your slide. But on the Micro Roni, you get something that looks more like a lever which isn’t very ergonomic and requires a bit of practice to get used to it.

Price is also an exciting category to consider when comparing conversion kits to ensure you have the right budget for it. The Micro Roni and the MCK give you value for your money, no doubt; however, the Micro Roni is the more affordable option.

Although the MCK is a bit pricier, it comes with more improved features. Hence, you will find it more convenient to use and easier to hit your target with an MCK. But if you do not have the budget for the MCK, then you should opt-in for the Micro Roni.

Which is better: Micro Roni vs MCK?

Overall, MCK vs Roni MCK is a better choice than Micro Roni. While they both function greatly in converting your pistol to a subgun in seconds with no tools needed, the MCK conversion kit stands out more. With the MCK, you will find it easier to shoot, experience softer shooting, and have a more accurate platform. This does not mean the Micro Roni does not perform well, but the MCK performs better.

While everyone will want to choose the better option, it is important to note that these improved features come at a steep price difference. If the price difference feels too steep for you, you can always go for the more affordable Micro Roni. While the Micro Roni may not be Olympic-level marksmanship, it is still a great conversation kit that improves the overall usability of your pistol. The choice is completely yours to choose what works best for you.