Home Blog Micro Roni Stabilizer: Interesting Things You Need To Know About It 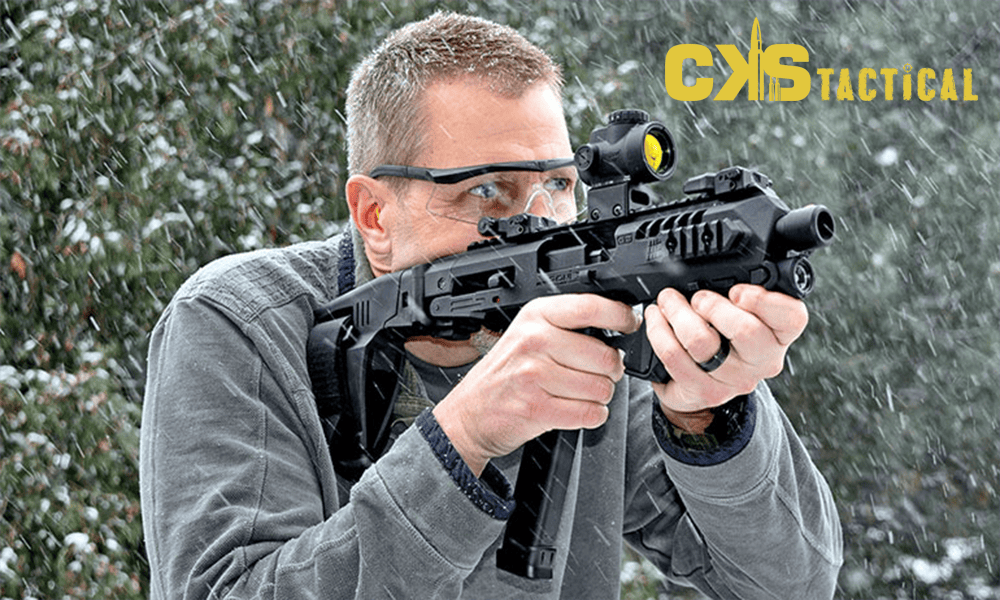 It is no less a fact that different conversion kits are being manufactured in recent times, and the Micro Roni is one of the leading inventions of the time.

Micro Roni is a pistol conversion kit that fits around the handgun. The Micro Roni Stabilizer makes the handgun look like a rifle with a short barrel, thus enabling a better grip, quicker aim, firmer stability, and a more effective shooting range.

A Micro Roni Stab improves single-handed shooting performance as a result of the foldable stabilizing brace.

Even with the brace, the handgun remains a handgun and it is completely legal.

Interesting Things You Need To Know About The Micro Roni Stabilizer

One of the major reasons to use a Micro Roni is the comfort provided. Better shooting performance and range can only be achieved if the ergonomic condition of your handgun is top-notch.

A Micro Roni is a handgun with the shooting accuracy of a carbine due to the ergonomic comfort that it gives. The conversion kit allows access to an ergonomic folding and thumb rest, thus the ability to shoot at farther distances.

The overall take on the ergonomic ability of a Micro Roni Stabilizer is that it is easy to hold, aim, control, and fire at specific distances.

The Micro Roni Stab makes the single-handed shooting of a user better, compared to when the pistol is being used alone.

This one-handed shooting feature is a result of the right-folding stabilizing brace of the kit.

Irrespective of the shooter’s skill, using Micro Roni Stabilizer alongside a handgun gives a better precision and sight action.

Moreover, many of the components of a Micro Roni are ambidextrous, that is, it can be handled by either right-handed or left-handed persons. These components include the thumb rest, trigger-guard safety, the integral flashlight, and a very fast charging handle.

As a plus, it is comfortable to shoot from the shoulder.

It takes no more than ten seconds to place a handgun or pistol in the Micro Roni stab. Also, Installation of the pistol does not require the use of any tool.

The steps involved in installing a pistol in a Micro Roni Stabilizer include:-

The Micro Roni Stabilizer is a lightweight conversion kit that gives the handgun the accuracy of a carbine.

The compactness and user-friendly interface of the kit immensely increase the shooting accuracy of a pistol, a firmer grip, stability, and the use of a wider range of accessories.

The Micro Roni Stabilizer is made up of an aluminum frame that covers the locking mechanism. This aluminum spine is surrounded by a polymer of very high density, thus it is resistant to wear and tears.

Other than the fine feel the frame spine has provided, it also provides a lot of comforts, making shooting easy.

Other components found on the Micro Roni Stab include:-

Usage of the Micro Roni Stabilizer

Formerly Micro Roni models were manufactured for Glock pistols, however, in recent times CAA designed a full-size kit for different pistols. These include Springfield, SIG, HK, CZ, and Beretta, among many others.

The compatibility, lightweight, supreme features, and accuracy of the Micro Roni Stabilizer make it the perfect choice for the following groups and applications:-

In addition, it is very easy and comfortable to operate either from an open or a closed position.

How Does the Micro Roni Stabilizer Work?

Once the pistol is inside the RONI (following the installation process earlier mentioned), the charging arm doesn’t have the space to slip around the slide, the simply made design prevents it from this.

The charging arm attached to the slide reciprocates with each shot.

The Micro Roni polymer walls are thick and toughly built. To pivot the kit downward, a button is pushed into the hatch at the rear end of the unit.

At this point when the hatch is open and the charging handle attached to your slide, gently insert the muzzle of the pistol into Roni’s body, tilt the whole gun upward, and push forward until the “extraction button” clicks.

The “extraction button” is the primary lockup point for the pistol inside the Micro Roni.

As soon as the pistol is set in place, close the hatch and put it forward and it locks against the rear of the pistol.

When removing the pistol, pull down the extraction button on each side of the receiver. As mentioned earlier, the total installation time is not more than ten seconds, the same goes for the removal of the pistol from the kit.

The length of the Micro Roni Stabilizer is around 19 inches when the arm brace is locked in place. When the brace is folded, it is about 14 inches long. This accounts for the ease of storage and transportation.

However, note that the brace is free and it swings when it is not locked in place.